I remember when Sawyer started learning things faster than Noah did I was amazed but now with Ryder it is just ridiculous, he wants so bad to be like his big brothers!


Last night Noah came in and told Jeff and I that Ryder was standing on the oven, I figured he was talking about the play kitchen (something that happens daily) Then Jeff said to come look at our baby in the kitchen...... 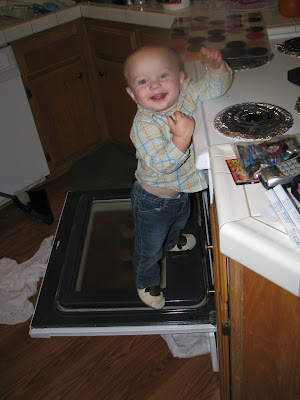 We had given the other two cookies for dessert and left them on the oven, apparently he wanted one too!

I can't believe how fast he is picking up on everything, in church he was playing with the star wars and making little whoosh (light saber sounds) like Noah and Sawyer do. Jeff and I were cracking up.

He's like a little sponge theses days picking up the good and the bad!
Posted by Abby at 2:07 PM

I wonder how he pulled the lid down.....they are heavy! Super funny.

Oh boy! What a funny kid!