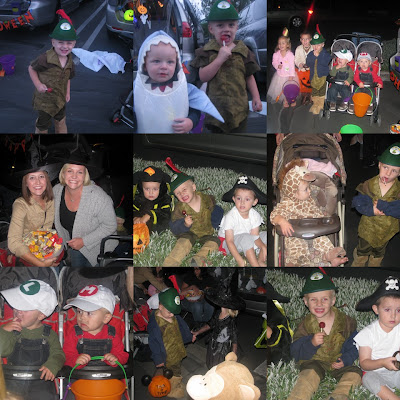 Thursday night was our wards trunk or treat we had it combined with another ward which makes for a little chaos. It was still fun but a lot of kids!! Noah finally understood the concept this year but half way through was asking to go back to the car to partake in his yummy treats. Jeff was such a good sport and stayed behind with the candy and Ryder while I took the other two around. I think my friends dropped off their candy to him because there was no where to park he was happy because I guess the 250 pieces of candy didn't last long!!

Sawyer had a costume change I put him in Noah's old Shark costume because his pluto costume makes him really hot, he ended up winning the costume contest. He looked so cute. He had a blast and was so well behaved because I had given him a tootsie pop to suck on while we walked around. We had a great time and the boys loved going around collecting candy!!!

We totally meant to go but forgot at the last second, oh well. Sawyer does look super cute in the shark costume.

I didn't know he won the costume contest. that's awesome!

Thanks again Jeff for passing out our candy for us.

O cute Abby! I loveed that you guys came down! i don't think i got that book though!!

Cute!!!! I need you to send me the cute pictures of you and me and the one of my boys!