This week started out rough. Ryder had a fever Sunday before church I stayed home with him, he was fine while on Tylenol, I figured he was just teething, you know those nasty eighteen month molars. Then sometime Monday he was so much worst......... 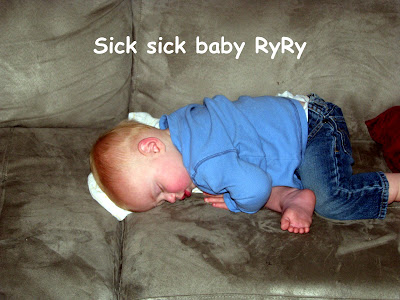 The poor baby couldn't even hold his head up. I am not a Dr. person but just felt the need to take him in since he really had no other symptoms. They gave him a test for the flu and a test for strep. The flu test came back slightly positvie, so they sent it out to be tested for the dreaded H1N1. Since that is pretty much all they are seeing they started him on the Tamilflu.

The bad thing is there is NO more tamiflu for babies, so I had to find a pharmacy that would grind up the adult version for a baby. That stuff is a miracle worker after the first round he was already feeling a lot better. Jeff and our neighbor Marc gave him a blessing Monday night. We have been lying low all week. and today he is more than normal. Back to his old self. Still no word on whether or not it was actually H1N1 but I hope it was and I hope we are done with it. We have been passing sickness around for the last month and the dr. said we have probably all had it.

I hope this means we will be well for the holidays!!

Ryder's newest thing is his refusal to eat bread..... 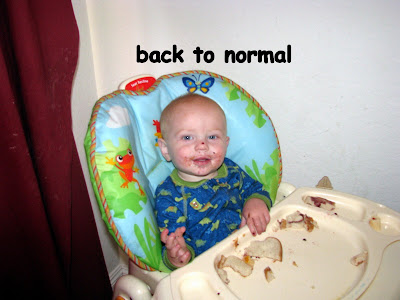 he sucks off whatever is on it and then throws the rest on the ground!

I hope everyone is having a better week than us!!

He is so cute. I'm glad he is feeling better. We missed you guys at Thanksgiving.