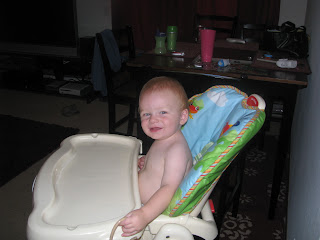 Sawyer has the cutest and longest red hair. Wherever I go people always ask where he got it from since Jeff and I are both blonde. His hair has gotten so LONG....I have been wanting to cut it for weeks. Jeff loves it and did not want me to cut it....every morning when Jeff goes in to get Sawyer he calls him big red and I just laugh. I think he is afraid that it won't be red if I cut it.
Well finally we cut it this weekend....poor boy it has been like 100 degrees and he is so sweaty. His hair is so thick in the back. I think that when we cut it off he lost like five pounds. Here are the before and after shots..... 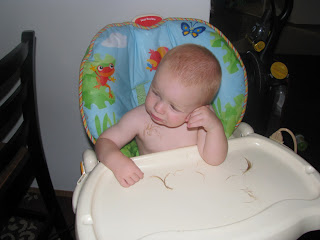 This is Sawyer's pout...he is so sensitive whenever we tell him no or anything he doesn't want to hear he makes this face and won't look at you until his feelings aren't hurt anymore. Really it is hard not to laugh at him....he gets so upset over the littlest things. 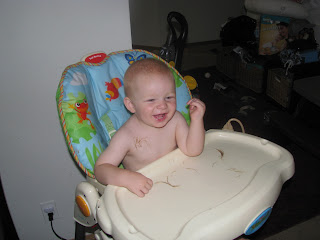 and this is just a random Noah picture...he is loving his sunglasses and wants to wear them when we go in the car! 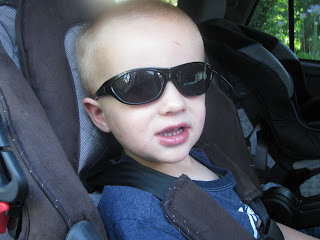 I can't believe that you finally cut it, I think I would just let it grow and grow. Poor Jeff, he can still cal him RED. He still is a super cutie even with his buzz.

All I can see are two little mini jeff's running around! So cute! One more on the way?

I love that little pouty face. You
still give your dad that same face
when you want something!!!!!It must be genetic, I know Noah does it too.
xoxoxoxoxox MOM

YEAH! I LOVE the haircut. I love the pouty face and your mom is right, I can totally see you doing giving it.

Uh oh another sensitive one. I know just how he feels. Whatever you do, don't tell him he is over sensitive, I hate when mom tells me that!

I love it! He is so dang cute and the pouty face is priceless!

Okay in that first picture, Sawyer looks just like Noah. Crazy! But I love the haircut, Sawyer is so cute!