Warning: baseball playoffs are on and it is either watch that or blog, so I apologize if this gets long.....Well it has been a week since I blogged so I thought I would catch you all up since we had a busy week.....Last Saturday we got to hang out with Jeff's Dad and Family, Jake, Jamie and Jenna were in town so it was a fun time to get together....if I was a better mom I would have taken pictures!!! On Sunday we (me and the boys) Jeff was sick, went down to Temecula to see Jack get blessed....it is so funny because Noah thinks that Jack is his baby he carries around his picture and talks about him, it is too funny! We also got to hangout with my family Noah loves to see them and play with his Grammy, Grampy, Eslie and Ickle....and his cousins Orter and Arter...(Noah speak) again if I was better I would take more pictures.... 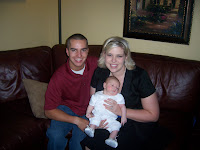 On Wednesday we went on vacation with Jeff's family to Disneyland!!! My favorite place!!! WE HAD SO MUCH FUN!!! It was just nice to be together and have fun.......... 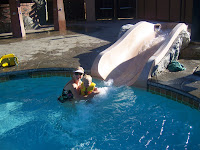 Noah loved the pool at the hotel, it had a little water slide that he thought was made just for him!!!

This was Noah with "Kunkle Ob" and "Aunt Annon" on it's a small world Noah had so much fun with them!! I think after spending a few days with him he definitely won't be getting cousins anytime soon! 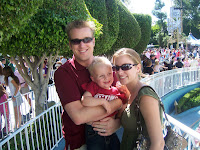 One of Noah's favorite things to do this trip was to meet the different characters.....he was so obsessed!!!! Here are a few he met..... 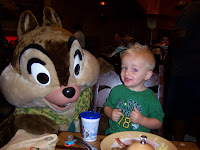 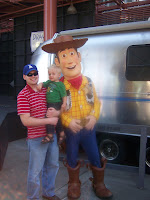 Sawyer is the happiest baby I have ever met....He just hangs out in the stroller and is happy when his brother talks to him or we pick him up to go on a ride!!! 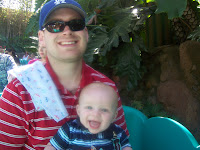 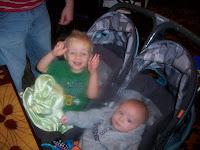 Noah loves being with his Grandpa and Grandma, he always has to make sure that Grandpa is paying attention to him at all times!!! 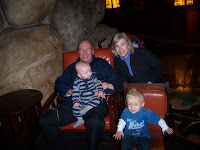 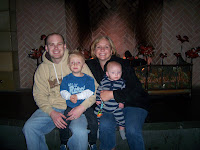 Attention all candy and chocolate lovers.....if you are ever in Downtown Disney there is the most fabulous candy store....Marcelines Confectionery!!! It is heaven on earth!!! I personally recommend the Rice Krispy Treat with chocolate or any of the chocolate covered pretzels!! I think I gained five pounds just walking past the store.....it is to DIE FOR!!!
Posted by Abby at 7:48 PM

Okay I was starting to wonder if you were even alive!!!! I'm glad you guys had fun, but I'm even happier that you are now at my disposal to talk about whatever we talk about whenever we want. Missed ya! See you for conference.

I never go to Downtown Disney, I guess we should "walk" through there on one of our trips.