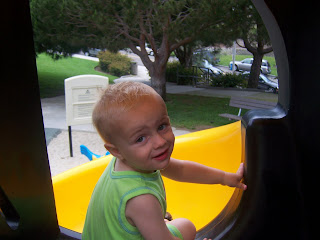 Well he is it at it again. I swear we have had more drama with Noah in the last few months than we have had in his whole two years of life! Yesterday while we were at our playgroup Noah decided he needed to play upstairs, after I had told him over and over again not to go up there. After a few minutes I heard him cry and scream, I ran up the stairs thinking the worst and Noah had locked himself in his little friends bedroom. It is a lock that requires a key. So luckily I was once again with my great friends who helped me to remain calm and keep in eye on Sawyer while I tried to console Noah. Noah was screaming and crying to get him out. It is times like this I just wish he could understand a little better. It just about broke my heart when he stuck his little fingers under the door. So there I was holding his hand, slipping him candy, his pacifier and his blanket. My friend called her husband and he tried to pick the lock. He finally told me he didn't think he could get it and I should call a locksmith. At this point I was starting to panic, Noah had stopped talking and I figured he either choked on candy or fell asleep. Well as soon as I called the locksmith my friends husband was able to get him out! Sure enough he had fallen asleep on the other side of the door! So to my friends I promise I was not this much drama before you met me we where pretty uneventful!! I think someone Else's child should be the example next!!!
Posted by Abby at 4:09 PM

What a crazy day that was! I am so sorry that happened, but I am glad everything worked out. And just so you know Brody and I are not next on the drama list. I think I have had enough lately!

I think you were more drama before you met us and I wish that I had gotten away from the TV (and the phones) to be there- DANG fire!
Today, no TV, different phone calls and tomorrow- FIRE PARTY at your house!!! I can actually leave, well have an excuse to leave.

Ya know, this is just what you get for leaving me. (I only say that because I miss you a ton. I promise I don't wish anything bad for you.)