I have never really done anything for my kids on St. Patricks day but this year I thought it would be fun especially since Noah learned a little about Leperchauns at school. I made a bunch of little feet prints coming from the front door to the kitchen table......this picture is after Ryder did some rearranging. And next time I am going to have to cut out the feet prints individually because Noah just didn't understand why they stepped on paper. Dang it. 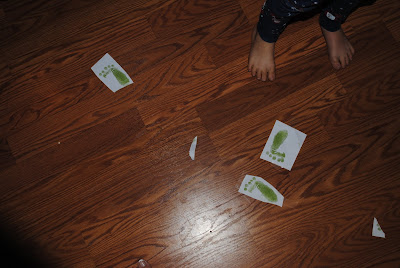 This was sitting on the table.....of course I got the picture after the boys had destroyed part of it.
Inside the green bucket was some beads, glowsticks, rings basiclly anything I could find at the party store that was green 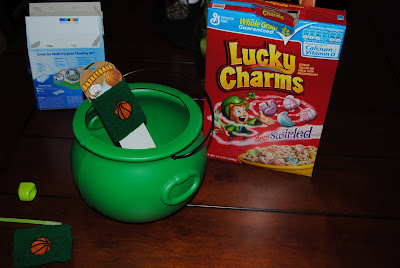 Those naughty leperchauns also turned the milik green.....Noah hated it....he wouldn't eat his cereal and gagged when he tried. Such DRAMA. The rest of the boys didn't care. Ryder was a little confused by the green milk in his bottle and I was less then thrilled of what followed in his diaper....next year maybe green pancakes :)

They also dyed the toliet water green....but Noah was very happy when it only took two flushes to get rid of the nasty green water.

All and all some great new traditions I hope to carry on with my boys!
Posted by Abby at 1:59 PM

That is hilarious. Turning your kids poop green!!! Funny.

So creative. I have never done anything either for that holiday.

Super cute ideas! I've never done anything fun like that before! Hmmmm, maybe next year?