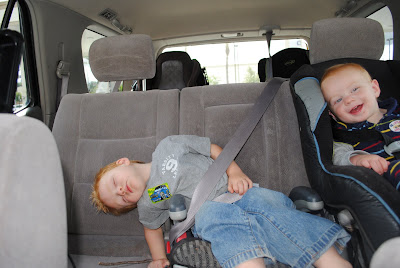 It's not that I have given up on my taking pictures everyday it's just truly our life is pretty much the same everyday. See even Sawyer is bored with it!
Life pretty much consists driving Noah to preschool, taking the boys to the park and then a lot of boring stuff in between. I know that someday I will wish that I could have a little monotony. One thing that never gets old is the funny things my boys say all day long.
Sawyer is probably the funniest, mostly because he doesn't try he just is a hoot. We have been working on potty training so for the most part he is running around in his underwear. His favorite thing is to put things in his pockets and when he isn't wearing pants he just sticks things in his underoos. It gives a whole new meaning to "junk in the trunk"
The other day I was at our neighbor across the street I told him he couldn't come with me because he had no shoes or clothes on. Next thing I know he is walking up the driveway in his bright green underwear and bright green crocs to match. At least he got the shoe thing.
He still asks to wear the high heels daily, sadly Dad has revoked that one. He loves movies that have songs, and his new favorite is Mary Poppa's as he calls it. He is such a fire cracker.
Ryder is my shadow these days, he as always been super clingy but lately has really become attached and won't even go to Jeff. I will say it is kind of nice. He is my baby and I definitely spoil him. Hence the horrible tantrums we now in counter everywhere we go. Between him and Sawyer they are eating us out of house and home. He LOVES to eat!! He walks around most of the day following the big boys making some very shooting noises as he tries to fit in.
Noah is my sweetie he comes up a few times a day and gives me a hug and tells me he loves me. I love it!! He has become such an awesome helper! Everything is all Star Wars all day. Jeff made the comment that star wars has become the soundtrack to our life. It is so true. Noah's favorite thing is to leave the DVD on the menu screen and listen to the music over and over again. I may have to break down and put some on my ipod. He wants to know the plan every day he needs to be entertained about every second. Which my mom likes to remind me it is how I was.
Today at Target two Mom's came up to me and said that Mom's of boys have a special place in heaven. I thought it was funny, maybe I looked frazzled. But it was nice to hear.
These boys make the monotony worth all the work.
Posted by Abby at 7:20 PM

That is how I feel about my life too. And I agree with those ladies, I LOVE being a mom of boys but boys are different from girls and I am a girl- sometimes I just don't get the boys stuff.

I love Ryder's expression in this picture!

LOL! I wish I had all that fun stuff to deal with!

Yes, enjoy the monotony now! Send Noah over to play.

It will be interesting to see how it will change and we won't feel like it is monotonous. Love the pic of Sawyer.