Last week I took Sawyer ona little mini date. WEll I had a Dr. appt he was so sad so he came with us. Grandma Jody watched the other two and was so nice and told me to take Sawyer to lunch and spend some time with him. So we headed to the mall after the dr. He got a happy meal at McDonalds. As we were leaving I remembered about this great sale at Build a Bear and that I had a gift card. So I thought it would be fun for us to do......

Build a bear was having an awesome deal where you get any stuffed animal any outfit and any pair of shoes. For 30 dollars. If you have been in that store that is a STEAL!!!
Sawyer picked out a PONY after making him he gave him an air bath. It was so fun to just focus on him. He picked to name his Pony Troy from high school musical he named him and picked out his Basketball clothes. He was so excited walking through the mall with his new found treasure. 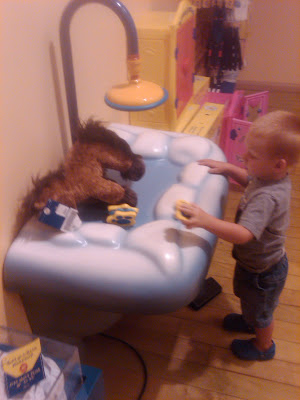 Noah was a good sport about it. We have been working really hard on behavior we have started a new system that is working very well. We are doing marbles in a jar and once they fill up there jar they get a prize. So Noah has been doing really well so I took him before the sale ended to make his animal. He chose a black puppy who he outfitted in a spider man costume. 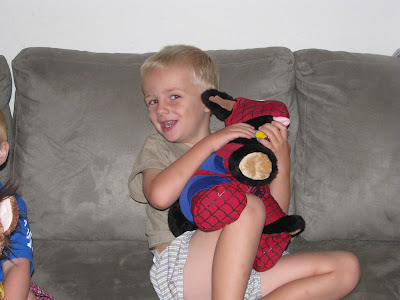 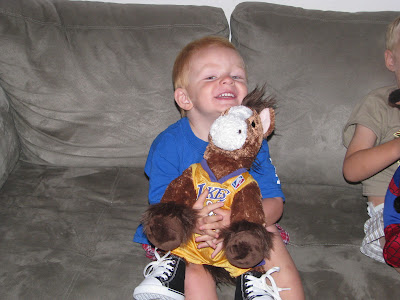 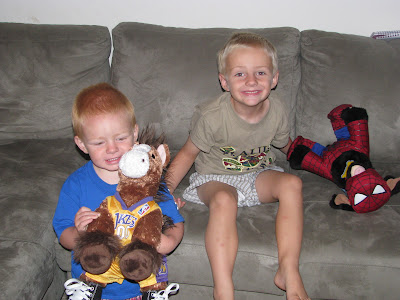 They have had so much fun with there new stuffed animals they are now a good bargaining chip at night when they are trying to leave there beds.
Posted by Abby at 2:52 PM

Labels: build a bear, my boys

LOVE it. Troy is hilarious.

Very cute!! I am glad that you got to take Sawyer on a date...I bet it meant the world to him! We need to do some kind of a reward system again because no one ever listens to me anymore and it is making me a very unhappy mommy!

Build-a-Bear is so much fun isn't it? They picked out some cute ones!!!