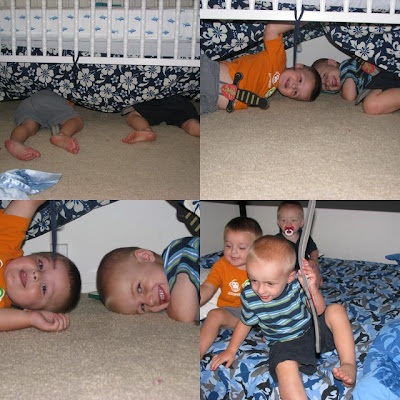 The other day while my friend Karin and I, okay Karin took Ryder's pictures the older boys found some new forms of entertainment. Grandma Jody brought these fun foam swords home from Utah for the boys. They love them Noah can't stop talking about his sword and how he is a knight. Karin captured the cutest pictures of the boys hiding under the crib and playing in the bunk bed. They were having so much fun and it gave us a chance to take tons of pictures Ryder for his birth announcement. I'll post those soon!!

They did NOT want their pictures taken. It is SO hard to snap photos when they are running around so much.
I hope the announcement photos are good enough.

I can't wait to see the announcement!!! The boys are super cute under the bed, those Brown boys always want to be under something.

oh boys!! They are too cute!! You must have your hands full...they won't know what to do one day when they have a little girl running around the house :)