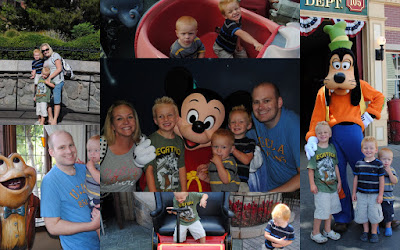 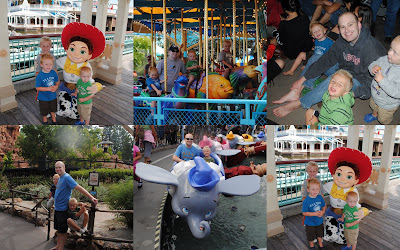 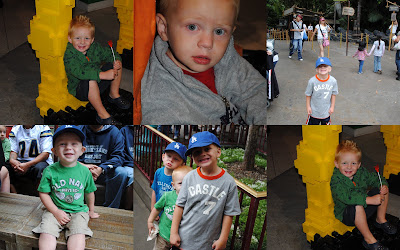 We had promised the boys a family Disneyland day once the craziness died down a bit.
We planned to take them last Saturday. Last Friday I called Jeff
and asked him to look into hotels so we could maybe make a
weekend out of it. He found a great deal on a Marriot right
around the corner from Disneyland.


When the boys woke up from there naps I told them what our plan was they were so excited.
We have never done anything like this with them. We have never done any kind of vacation with just the five of us. The boys kept asking when we were meeting up with Grandparents or someone
else. We went and picked up Jeff from work grabbed a quick bite to eat and headed up
to check in. We went and walked around Downtown Disney and buy our tickets for Saturday.

Saturday morning we headed into the park bright and early. It was great because there
were NO lines and the kids got to go on whatever they wanted. Noah was FINALLY tall
enough for Indiana Jones!!!! We then headed over to California Park to stand in line for World of Color
tickets. It took FOREVER!!! Jeff was able to take the big boys on California Soarin while I waited for
tickets. Luckily a nice girl behind us gave us a balloon for Ryder he was so happy.
In the afternoon we had a little scare from Sawyer. When we got off of Toy Story Mania we were all in the toy story store and suddenly we realized Sawyer was missing. We began to get frantic when after about five minutes we still didn't see him. I was quickly asking people sitting outside the store and checking the rides around bathrooms. Finally we found a worker who was radioing it in. Then a guy sitting outside the store saw Sawyer running and crying he grabbed him and showed him where we were. I was a mess at this point. And so grateful we found him. When we asked hime where he went he told us he wanted to go meet Jessie. So he went by himself. When we took him over to wait in line the worker was like oh good he found his Mom he was standing over here for awhile and she asked him where his mommy or daddy was and I guess he panicked and took off before she could grab him. I am glad he was ok. It was the first time I have ever lost one of them and I tell you what it scared me half to death!!!!


We went back to the hotel and took naps and grabbed some dinner and then we headed over to California Adventure to watch World of Color. I have mixed emotions about it. It definitely was a fun show. In my opinion not worth all the waiting and the hype. But I am glad we saw it. But I am glad we can check it off the list so we don't need to go through that again.


Since we spent all of Saturday at California Adventure we went back to Disneyland the next day. It was not crowded and so nice to take the boys on the big kid rides. I took the boys on Splash Mountain and they loved it. Sawyer was cracking everyone up because he made me cover his eyes almost the entire time. He is such a funny kid. He was so excited to go.....but doesn't love the big drops. But he did good.

WE had a great family weekend. The boys were so happy and well behaved. It makes me want to go to Disneyland everyday!! I love our little family and it was so nice to spend some time together.
Posted by Abby at 12:04 PM