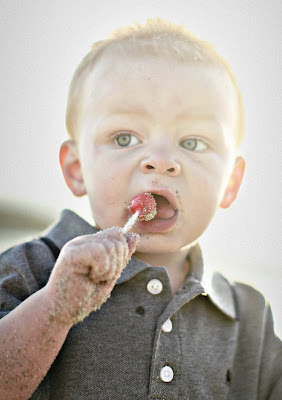 And although he is the cutest monster ever.....still.

It has been a rough month or so with Sawyer. Since I had my surgery someone is in desperate need of attention and he is going to get it one way or the other. And in my defense I try to give him the positive attention but obviously is not enough. I am at my breaking point......why might you ask......

Two weeks ago while Cari and the boys were visiting Sawyer bit Carter, Porter and Noah in the span of an hour so I washed his mouth out with soap. About twenty minutes later Jeff got home and asked me where Sawyer was I had just seen him/punished him I told him he was playing with the other boys. Jeff was like no he isn't. So we began searching the house. We have a great front yard with a gate that I put a padlock on so we THOUGHT he couldn't get out we spent a good ten minutes searching the house, yard, car, garage. NO Sawyer....cue panic. We started checking with the neighbors when a lady drove by asking if we were missing a little red head. He was about to streets over walking in the middle of the street with no shoes on. Seriously I can't even think of everything that could have happened to him it makes me sick. We did figure out where he was making his great escape and have remedied the situation.

That is ONE of the big incidents and then the rest is normal two year old stuff, total frustration no fear ....blah blah blah.

Until last night. I was talking with a friend from chuch who serves in nursery we got to talking about Sawyer she was like well besides the day he slapped me in the face he does pretty well. I was like wait what..the ????? I always ask how he did....she said it was weeks ago? I am guessing when I was not going to church from surgery???? Seriously I have the kid that leaders see walking in like dang he is here today. I am panicked I have never wanted the bully kid and now he is bullying the leaders?????

And then today.....I was in the bathroom I came out to find Sawyer standing in the kitchen spitting out white stuff. I quickly realized what he had eaten.....my antibiotics for my sinus infection. WAIT before you call CPS it was in the cupboard he used a step stool to get on to the trash can then onto the counter. I swear I couldn't have been gone three minutes. I quickly counted the pills and then subtracted the doses I have taken there was only one pill missing he spit the bite out and put the other half back in the bottle. I called poison control just to be safe. And then gave him a talking to.

We have to tie the fridge and kitchen gate closed with a tie so that he can't get into them. Oh and not to mention he comes out of his bed atleast three times a night.


Nothing fazes him, spanking, time out, washing his mouth out with soap. Nothing.
I am so done. He has such a fun spirit is so cuddly and I just wish I could give him the attention he needs. Jeff and I are going to try taking him on a "date" to see if that helps but seriously. Am I just a really bad mom. I ask myself daily. I just don't know how to get through to him. He is going send me to the mental hospital from all the anxiety.
Posted by Abby at 5:09 PM

Your red-headed, 2yo has never hit me. This just means that he will be an easy teenager.

Let me know how the "dates" go. We keep talking about doing that but the older boys like to go together.

CRAZY!!! I don't blame you one bit for wanting to kill him, I would be feeling the same thing if Gwenie was doing that stuff.

I hope the dates are the key. I wish someone would just tell us the key and then we wouldn't have to figure it out with trying everything!

I swear some toddlers just give you a run for your money more than others. Mason also is getting into the testing EVERYTHING phase, the other morning I found him downstairs sitting on the front porch all by himself, too, granted he wasn't walking down the street - but I had a panic attack searching all over the house when I saw he wasn't in his bedroom. You are a good mom already because you WANT to do something about it and not just ignore the problem and hope he grows out of it. :) So hang in there!!

I am right there with Erin...it is not like you are just sitting there watching him do these things wondering what to do. You are trying...and that is what matters most. You do a great job Abby, so don't sell yourself short. That won't help any of you. Just keep trying, and I am sure that with time things will get better.