Obviously if you read my blog you already know that I have a crazy love for the heart holiday. Last year I did a party for all of Noah's little friends. This year we have over doubled our numbers so instead of doing at my house I opted for the park.....we had a great turn out I think 22 kids. CRAZY! They had so much fun eating, playing and giving each other valenitnes. Noah still has a few left and tells me every day that his friends like him. TOO
cute. So thanks friends who brought lots of yummy treats and went with me in my crazy obsession. 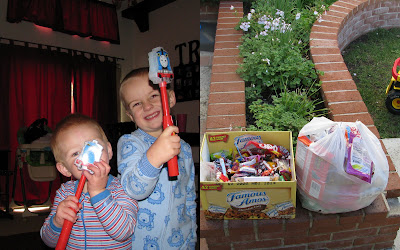 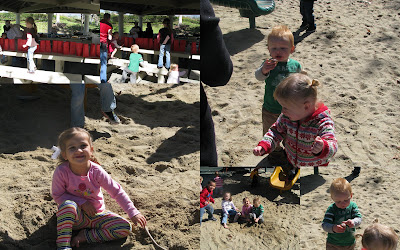 This other collage is the boys and their thomas lights.....they are obsessed with them! And I am trying to get back on track with my diet....last week I cleared out ALL the candy......yah embarassed that is ALL the candy I threw out. I bought a ton of stuff on clearence after Christmas. Why....who knows...so I tossed it. And believe me I have had to dodge the V-day sales so I am not tempted.


I have a serious candy problem....I blame it on my father....except he is lucky that he doesn't have to worry about it like me....if only I had gotten the skinny gene like him and my sister. Then I too could have snickers for breakfast. Not saying that the other people in my family are fat but those two eat HORRIBLY and still are as thin as a rail. So not fair. So heres to getting back on track. I have actually been good this week....Jeff has been REALLY sick with rotavirus....I am paranoid that I am next....so I have been hardly eating because in my crazy mind if I don't eat then I won't throw up....like I said I am totally crazy....but last night I finally got a good night sleep in my BED. Wahoo for sleep...I have been a crazy person!

I am still bummed that we missed the party.

I think you had more candy that I have, I have gotten better about not having so much candy in the house.

I don't blame you for the candy thing, I have stopped buying it and Ice Cream (which is my fav). I hope you don't get sick either I would totally be paranoid too because you can't be sick when you have kids.

Holy Cow!! That is a lot of candy. Sometimes I bring my extra candy to park day and give it away. The kids love it, the moms not so much, but the candy is gone in a flash!! And I hope you don't get sick!! Rob says he rarely gets sick because it's "mind over matter." Looks like it's working - keep up the good work!!