While I was in Utah Noah had a little accident on the trampoline.
He pretty much had his leg buckle on him and caused him to break his ankle at the growth plate. Luckily it was only a 2 on a 5 point scale so it won't be too bad of a recovery.

He has to have a cast for 4 weeks. The first few days Noah was lying around which is so not like him. That is what had me convinced that it was broken :( he is a trooper and has learned to get around just fine with one good leg. 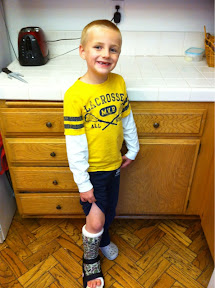