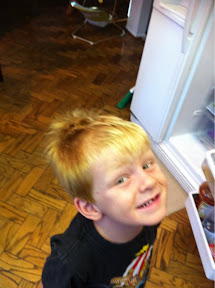 Sawyer is the funniest/spunkiest/stubborn kid on the planet. Is spunkiest even a word??

He keeps me on my toes every single day and now that him and Ryder are best buds we have major TROUBLE.

Some funny things I want to remember.

-he cut his hair in the above picture so he could look like his brothers and Dad. I miss his red locks.

- when he gets hot he puts sunscreen on he says it helps cool him off.

- loves to sing. And makes up songs and talks in a singing voice a lot of the time.

- we bought him a new hat to wear bc he gets so fried and he told me he couldn't wear it bc he looked like a grandpa and none of his friends would like him or recognize him.

Ah that boy. Such a character in every way!!


- Posted using BlogPress from my iPhone