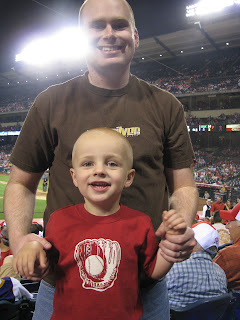 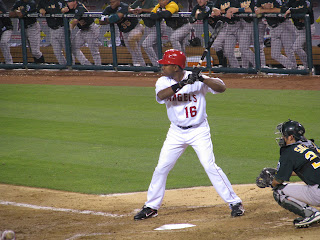 Last night Jeff, Noah, Grandma Jody and Grandpa Rich went to an Angel game. Noah has been excited about it for days!! It was his first REAL game, the last time he went he was five months old. 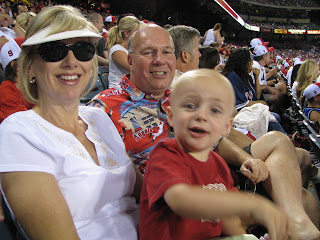 Jeff said they had a lot of fun. I told him he had to take lots of pictures so that I could put them on the blog. Noah had a lot of fun eating yummy snacks, and smashing peanut shells. Jeff said that when they got there Noah wanted to go down on the field. He thought that he was going to get to play baseball.
He wanted to sleep with his bat and ball last night, so I promised him he could have it in the morning. I thought he would sleep in a little being up until eleven, but he was up at five to six, looking for his ball and bat. Crazy kid really I need to steal some of his ENDLESS energy!!
Jeff told me I had to post the pictures of the players to show how close they were! 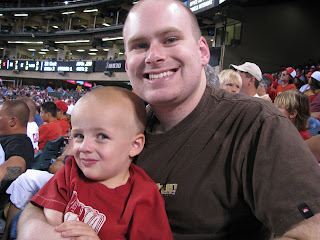 This is for Sarah...Jeff knows how much you like Vladi...even though you got to see him last in person..in case you get bored today.... 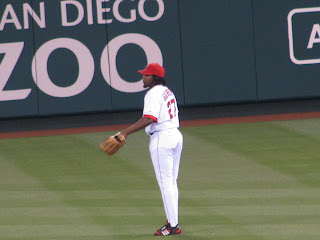 Sawyer and I had fun hanging out together...I think he may have been a little bored. It was so nice to run around town getting some last minute errands done with only one kid. I also got to enjoy a night of scrapbooking!!! I promise I will post pictures of that soon....seriously I am so addicted right now. It is all I want to do!!

Last but not least I am finally down to less than 100 days of being prego!! It is actually going by really fast and I am just starting to get into the uncomfortable state of HUGE!! and yes the waddling has begun...especially after a long day or when I am tired.
Posted by Abby at 8:11 AM

We love the Angels, it is so much fun to go to a game. I bet it was great to only have one kid for awhile.

I have not seen you waddle, I think you are making that up.

Wait, I thought he was a Dodger fan! I can't show this to John, he will definitely not want to talk to Jeff anymore!

I guess Noah is old enough to go to a game, Brody not so much yet. That would be miserable for us! Glad they had fun!

I love the look on Noah's face in the picture with him on Jeff's lap. I remember the first time Sam took Porter to a Dodger game and Porter loved it too!

Kelly,
He is still 100% dodger fan. He got tickets from a client so he took Noah. So him and John can still be friends. I wish he would like the Angels more...they are so close to us.

I am glad they can still be friends. What is really funny is John just remembered that his team is taking the client to the Angels game tomorrow night. He is trying to get out of it and using me as the excuse being sick and all. I really do need him here though. You know he really hates the team if he is turning down boxed seats. He says he is going to go for at least the last half so it is bearable. I don't understand it. I dont' mind the Angels. (sorry I rambled)

Glad to hear you are doing well. Thats cool that Noah got to go to the game! I can't wait to see the new one!

I am jealous you had a night with just one kid. You forget how easy one is. And I wish I had the energy (and creativeness) to scrapbook right now. I am still planning on having you scrapbook for me.

You guys it is the Dodgers that are the crappy team, when was the last time they won anything????

The Angels are so much better and have better uniforms.

The Angels are awesome! I've always loved them! Its sucks here cause UT doesn't have a major league team! : / The pictures look great!

The pictures look great! And boy are we out of the loop, we're so not baseball fans at our house. We are going to a Cincinnati Red's baseball game in July, but that's only because it's a family reunion. Oh, and my mother in law is staying home to play with all the kids. So I am sure I will "love" it.:)

OH MY GOSH!!! THANKS JEFF!!! I NEED A COPY TO PUT NEXT TO MY DESK!! NICE BUTT! Too bad we were at the same game and didnt know!

ok i really like your friend Darci! and she is the one i will be living next to right?? awesome! lets convert jeff and we can triple!

Abby told me that you might move in next to me, that would be great. Also we TOTALLY have to convert Jeff and all go, Vladdy is a hottie and baseball guys always have the best butts.

Vladi is so freakin ugly. I don't know how anyone can stand to look at him. I will never convert. I bleed dodger blue.