I am horrible at making decisions. Awful in fact.  I hate doing it and will pretty much do anything to just take the easy way out.  I am a tad bit LAZY!

A few months ago Jeff and I realized we had some big decisions to make in regard to Noah. He has always struggled in school and especially with the move has really had a hard time.  Every decision seemed to be just a bandaid for the bigger problem.  Plus if we already weren't having a hard enough time making a decision for 1 child we now are talking two of our children  What we do with Sawyer comes into play as well.

Noah was doing so well before we moved. He was FINALLY progressing. He had an amazing teacher whom I LOVE. I had seriously started to question our entire move and job because he was REALLY struggling.  His new school was a complete JOKE! Lazy teachers. Lazy staff. Lazy everything.  I was so disappointed because I felt like we had finally gone over a huge hurdle in his education.

Jeff and I finally decided that this particular school wasn't going to meet his needs.  My original goal was to get him switched to another neighborhood school the best elementary school in the area and all the kids in our ward go there. Unfortunately it was too late for a transfer.  (knowing what I know now I could have gotten him in especially with his needs and his IEP)

After I was shut out from that opportunity I began researching Charter Schools in Temecula.  Luckily we are BLESSED with more options in this arena. The district we came from had NO charter schools and you had to go to the neighboring district to attend one.  After checking out a few schools I wasn't in LOVE.  A friend directed us to another school. Quickly Jeff and I fell in LOVE.  I mean the school has it flaws. Nothing is perfect. But what sealed the deal was they would allow Noah to start immediately.  We were THRILLED.

Noah has been at Keegan Academy for about a month.  He is doing SO much better.  We couldn't be happier. He is in a class with 18 kids half are first and half are second so he gets a ton of one on one time. The curriculum is so much better and we have already seen Noah making great strides.  He isn't crying and sad to go to school and actually is trying to do better. 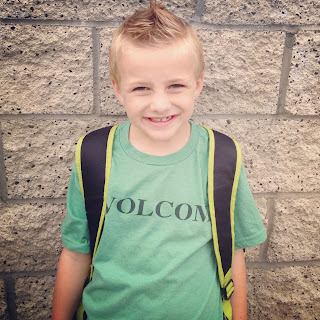 I miss the neighborhood school feeling and school facility. But I feel like this is the perfect place for Noah for the next few years.  I am so glad that we have found some place that works for us and for Noah. To see him excited about learning has made a WORLD of difference!!
Posted by Abby at 4:21 PM